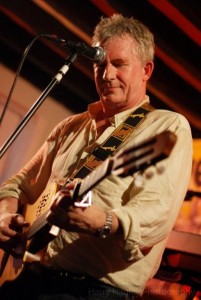 Andy is a singer songwriter based in Southsea in the UK. He has released three albums of original material, the latest, ‘Walking In Slow Motion’ is available through iTunes and Amazon.

His earlier albums ‘Navigator’ and Zaponia are available on mail order. Drop Andy a line to get hold of one of these.

Andy started his music career with a band called “A Leap In The Dark‘ who played a combination of original material and cover versions of Pink Floyd and Dire Straits songs. He then joined “The Untouchables”, a Motown, Soul and Reggae band who played mainly covers of classic tunes by the likes of Marvin Gaye & Stevie Wonder. He also played in a band that played new wave and punk classics for a while.

His musical influences are many and varied. A big fan of Ryan Adams, Lucinda Williams and Steve Earle and you may find the occasional cover of these appearing on this site.

Andy has a recording studio in his basement and spends many hours developing ideas for songs. He plays keyboards, guitar and sings both lead and backing vocals. He uses pro-tools to pull everything together. He plays a Martin acoustic, A 70’s Fender Stratocaster, A Fender Telecaster, Martin 12 String, Godin Acousticaster and a Korg ST vintage stage piano.

Andy is currently recording a follow up to ‘Walking In Slow Motion’ to be released soon. Watch this space.